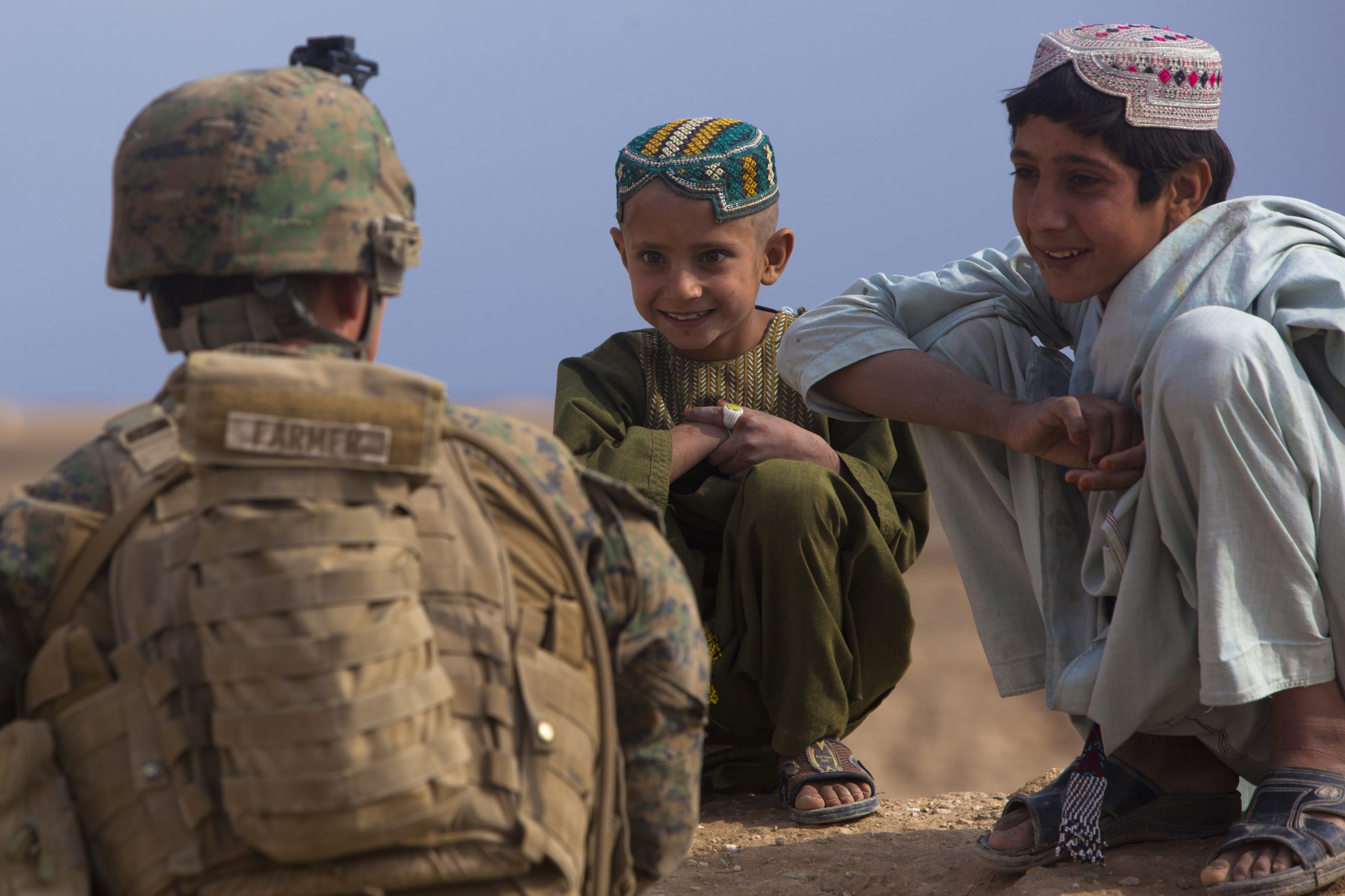 L. Ali Khan, founder of Legal Scholar Academy and emeritus professor of law at the Washburn University School of Law in Topeka, Kansas, writes on the recent Trump-Taliban peace talks, emphasizing the importance of narratives in framing policy…

War is not merely an armed conflict; it is also a contest of narratives.

Forceful narratives launch a war, but new narratives are crucial to make peace with the enemy. The war narratives justify the war for the public. War narratives are not necessarily truthful and may contain lies, deceptions, propaganda, and distortion of facts. Much like powerful nations, militant groups, such as the Taliban, commission their own war narratives.

Peacemaking requires the abandonment of the narratives that started and sustained the war. Otherwise, the conflict persists.

President Trump and the Taliban appear to have crafted the peace narratives to end the conflict in Afghanistan. Trump compliments the Taliban as “tough and smart.” The Taliban praise Trump as being “honest” and wish him to win another presidential term. These encomiums show mutual respect, necessary for effective negotiation.

A brief analysis of the Bush-Obama war narrative in Afghanistan contextualizes the peace process between Trump and the Taliban. If he wins the presidency, Biden, too, as explained below, will likely embrace the peace process that Trump has put in place.

Since 2001, the national security narrative has been drilled into the American mindset. During the Bush and Obama presidencies, the idea of negotiating with the terrorists was a non-starter, at least as expressed in public rhetoric. In 2003, President George W. Bush laid down the “we can’t talk to them” narrative: “You’ve got to be strong, not weak. The only way to deal with these people (Taliban) is to bring them to justice (kill them). You can’t talk to them. You can’t negotiate with them.”

In 2009, Obama-Biden inherited the Afghanistan war, and the narrative of non-negotiation. Seeing a new president, the Pentagon wished to further embed the U.S. military’s presence in Afghanistan by sending 30,000 more troops. Unfortunately, this act was akin to increasing the amount of the bet on a losing wager.

To his credit, Vice President Biden did not favor the Pentagon demand for a “surge”. The Pentagon, Biden feared, was overreaching “the inexperienced commander-in-chief”. Biden tried to dissuade Obama from acting upon the Pentagon’s proposal. However, Obama went for the surge.

The non-negotiation narrative permitted the Pentagon/CIA to kill “terrorists wherever you find them”, with marginal concern for the collateral damage. During the Bush-Obama presidencies (2001-2016), the public, national security analysts, journalists, think-tankers, academics, and politicians joined the chorus to demonize the Taliban as merciless killers infused with an incorrigible Jihadist ideology. This narrative is still alive and well.

In these decisions to kill, Biden reportedly disagreed. In his campaign speeches, Trump chides Biden for reluctance to kill.

For years, Obama embraced the untruth that the Pentagon was winning the Afghanistan war. Documents revealthat “Senior U.S. officials failed to tell the truth about the war in Afghanistan . . . making rosy pronouncements they knew to be false and hiding unmistakable evidence the war had become unwinnable.” In Obama’s presidency, Biden had been the in-house pessimist on Afghanistan.

In addition to supporting a failing war under the non-negotiation narrative, both Bush and Obama toutedAfghanistan’s democratization as a war dividend, thus furnishing a moral dimension to an otherwise hideous war. For likely war crimes and crimes against humanity, the International Criminal Court has started an investigation. Invasions wrapped in phony protection of human rights rely on the dubious concept of humanitarian intervention.

Unfortunately, the so-called democratic government, confined to Kabul, was corrupt to the core. Biden reportedlyprotested that the Afghan democracy is a make-believe strawman, with no roots in the ground.

We can’t talk to the terrorists projects the Taliban as the antithesis of democracy and human rights, especially Muslim women’s rights. Indeed, they are. Yet, given the extensive collateral damage in Afghan villages involving women and children, the idea that the Pentagon/CIA is concerned about Muslim women’s rights lacks integrity and credibility.

Over more than sixteen years, the U.S. war narrative produced two dubious barriers to negotiating with the Taliban. The first barrier was the mantra that we can’t talk to the terrorists. The second barrier was value-laden in that the U.S. would not negotiate with the Taliban because they are anti-democracy and anti-human rights. If consistently applied across the world, the second barrier will make it impossible for the U.S. to negotiate with China, Saudi Arabia, and many others.

In a 1987 law review article, A Legal Theory of International Terrorism, I argued that terrorism is an international conflict and that, under the U.N. Charter, parties to a conflict must settle disputes through peaceful means, including direct negotiation. In 2006, with more insights obtained after the 9/11 attacks, I maintained and expanded the negotiation thesis into a book. There were few buyers of the book, even fewer of the idea of the book.

President Trump, an anti-establishment naysayer, was ideally suited to change the war narrative in Afghanistan. Initially, the uninformed Trump came hard on Muslims in general and Afghanistan in particular. Soon after assuming the presidency, on April 14, 2017, Trump permitted the Pentagon to drop a 21,600 lb. “mother of all bombs” in Afghanistan. Trump called it “another successful job.” It was not.

Gradually, Trump began to modify the war narrative. First, he invoked the economic argument to criticize the war as a waste of money. It is reported that the conflict produced 157,000 deaths (mostly Afghan) and more than a trillion-dollar cost to the U.S. Most Americans understand the pocketbook argument and grieve when Americans die.

Second, Trump favored the idea of negotiation with the enemy, whether the enemy is the ruler of North Korea or the Taliban. This approach rattled the various national security analysts who build careers on violent conflicts rather than non-violent solutions. Former national security adviser H.R. Mcmaster opposes negotiating with the Taliban, accusing Trump of making too many concessions.

Third, Trump began to criticize the Pentagon, an unprecedented presidential practice. Trump always jested that he was “smarter” than the generals. He made fun of the generals he recruited for his administration and later fired them, calling them “overrated.” But then, Trump went further. He accused the Pentagon leadership of advocating war “so that all of those wonderful companies that make the bombs and make the planes and make everything else stay happy.”

Discarding the old narrative that we can’t talk to the terrorists, Trump has opened the way to negotiate with the Taliban. The Doha agreement the U.S. signed with the Islamic Emirate of Afghanistan (Taliban) is a bold move toward a new peace narrative. Continue to label the Taliban terrorists will not change the war narrative. If Biden wins the presidency, he is most likely to endorse the Doha agreement and end a costly war imposed on one of the world’s poorest people.

While Trump seems eager to end the war as soon as possible, the Pentagon is reluctant to pack and leave. “The key here is that we’re trying to end a war responsibly, deliberately, and to do it on terms that guarantee the safety of the U.S. vital national security interests that are at stake in Afghanistan,” says Joint Chiefs Chairman General Mark Milley.

The presidents can be skeptical of the Pentagon, which provides valuable expertise in fighting wars but cannot decide, in a functioning democracy, whether a war must grind on until some appropriate time. However, scapegoating the Pentagon while making peace with the Taliban is unnecessary, if not iniquitous.

In asymmetrical warfare, such as the U.S. conflict with the Taliban, it is foolish not to recognize the militants as the party to the war. The ineffective government in Kabul with little roots among the people cannot deliver peace. Only the Taliban, who have fought the war for nearly two decades, constitute the real enemy. This stark truth requires acceptance, not denial. We can’t talk to the terrorists narrative has perpetuated a failing war, causing unnecessary death and injury to Afghans and Americans.

Both Trump and Biden are opposed to the continuation of the war in Afghanistan. However, mere opposition to war is not enough to make durable peace with the enemy. A peace narrative is required to supersede the war narrative. The U.S. must reject the war narrative that the Taliban are terrorists and admit that they represent the Islamic Emirate of Afghanistan, at least as a de facto entity, as the Doha Agreement does.

L. Ali Khan, founder of Legal Scholar Academy and emeritus professor of law at the Washburn University School of Law in Topeka, Kansas, writes on the recent Trump-Taliban peace talks, emphasizing the importance of narratives in framing policy… In October 2001, the U.S. invaded Afghanistan to avenge the terrorist attacks on the World Trade Center…

Tags: and Peace with the Taliban Biden Trump